From a field on the bank of the Świna R. on Usedom Island comes a deposit of, presumably, 25 solidi, discovered in 1864 during potato digging, more coins continued to surface after that date. Ultimately, at least 30 solidi were recorded and linked with the deposit, scattered by ploughing. Some of the coins were melted down, fifteen or so passed to the Museum in Stettin/Szczecin, ten entered private collections. The oldest recorded coin was a solidus of Honorius struck in Milan in 395-423, the youngest, an Ostrogothic imitation of Anastasius I from the first half of the 6th century. At present only eight coins are available (including the two unique imitations), recently added to the collections of the National Museum in Szczecin. Our aim is to determine the culture landscape and context of the find. Special analysis is required also by the two Ostrogothic imitations to determine their dating and place of manufacture. 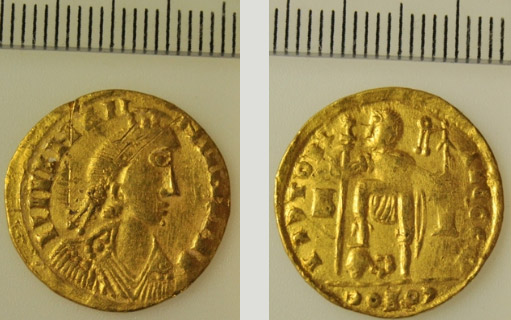 Ostrogothic imitation of the solidi (collection of the National Museum in Szczecin, © MB